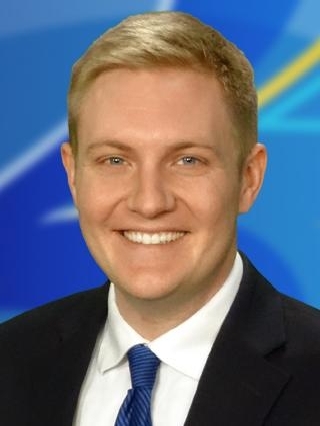 Before making the move to West Michigan, Sam spent two and a half years as a multimedia journalist for WEHT/WTVW in Evansville, Indiana. During his time there, Sam reported on a variety of stories in the tristate area of Indiana, Kentucky and Illinois. He also contributed to the Friday night high school football show, Home Team Friday.

Sam graduated from the University of Missouri-Columbia in 2015 with a Bachelor of Journalism degree in broadcasting. In school, Sam worked for KOMU TV 8 in both the news and sports departments, where he gained his love for TV news. He’s fiercely devoted to cheering on his Mizzou Tigers.

Sam grew up in Shiloh, Illinois, a small town close to St. Louis, Missouri. He went to O’Fallon Township High School where he competed on the swim team, and played ultimate Frisbee. He’s been a creative thinker since he was young, so storytelling was a natural career choice.

In his spare time, Sam loves to spend time with his fiancé, Jennifer, and the rest of his family. He enjoys being outside, hiking, playing pickup basketball, or (trying to play) golf. When he’s not outside, Sam is glued to the TV, either watching his favorite sports teams, or playing video games.

Sam is looking forward to getting to know the Battle Creek area, and telling your stories. He’s new to the area, and would love to hear from you. Shoot him an email at saknef@sbgtv.com.