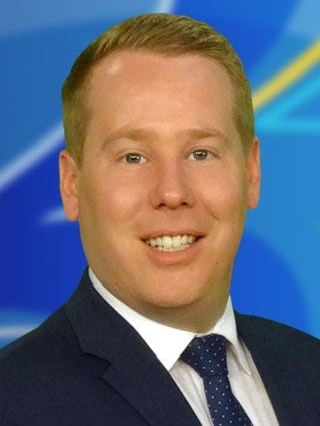 Mike McCann started at Newschannel 3 in late February 2017. He returns to West Michigan after spending the previous 2 and a half years as the Sports Director at KVRR, the FOX affiliate in Fargo, ND. While in Fargo, Mike covered the final two of North Dakota State’s 5 consecutive FCS championships. He also covered back-to-back Frozen Four appearances with the University of North Dakota’s men’s hockey team, the last of which ended in a National Title.

Mike spent his college years in Kalamazoo. He graduated from Kalamazoo College with a Business degree in the spring of 2012. Mike spent four years playing baseball for the Hornets, and was a two-year captain. He also served as the voice of Hornet athletics, calling football, basketball, soccer, and volleyball games during his time at K. He has been back to campus numerous times following graduation, appearing at alumni panels, and serving as the guest speaker at K’s annual “Why We Play” ceremony, something he also did as a student.

During the summer entering his junior year, Mike was the voice of the Kalamazoo Kings. Entering the summer of his senior year, he interned with Fox Sports Detroit, working mainly with the Detroit Tigers, which also served as the focus of his Senior Individualized Project.

After graduation, Mike worked a year as a Sports Update Anchor at WXYT-FM 97.1 “The Ticket” in Detroit.

Deciding that he wanted to venture into television, Mike went back to school, earning a Master’s degree in Broadcast & Digital Journalism with a Sports Communications Emphasis from Syracuse University’s Newhouse School of Communications, where he graduated in the summer of 2014.

Mike is a big sports fan, following all Detroit professional teams for as long as he has memories. He also is a big Michigan football and Syracuse basketball fan. The two-time Regional Emmy nominee loves to golf, and also watches Jeopardy avidly. Mike and his wife Danielle, who works as a producer at Newschannel 3, live in Kalamazoo.