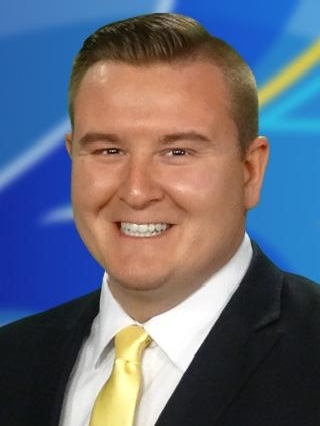 Luke Edwards started at Newschannel 3 in late August 2017. The Hastings native returns to West Michigan after spending two years in the sports department at KALB, the NBC affiliate in Alexandria, LA. Spending his first six months as the weekend sports anchor and then getting promoted to sports director for the rest of his time in the Bayou State.

Luke started his career in Helena, MT. as a general assignment reporter, but quickly realized sports was his passion and moved down to Cajun Country, where he learned to love crawfish and cracklins, while enjoying Mardi Gras in New Orleans.

Luke is a graduate of Central Michigan University. Yes, he is a Chippewa living near Kalamazoo, but he promises to put the rivalry aside while covering the Broncos. During his time in Mount Pleasant, Luke earned his Bachelor’s degree in Broadcast & Cinematic Arts. Getting his start in front of the camera as a sports anchor on New Central 34’s live nightly newscast. He also followed the Chippewas’ baseball and softball teams calling games as both play-by-play and color commentator.

When he isn’t at work you can find Luke in the gym trying to shed the weight he gained while living in the South, or at a local brewery rewarding himself for working out. When he’s not out and about he is probably screaming at the TV, while watching the Lions, Red Wings and Tigers.