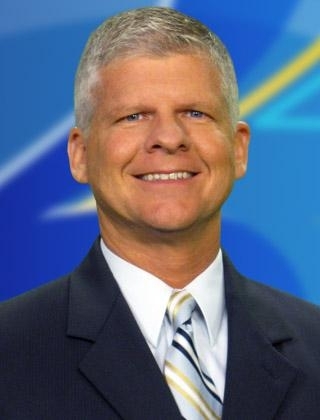 There are a lot of similarities between life on the Atlantic Coast of Florida and living in West Michigan. Just ask NEWSCHANNEL 3 chief meteorologist Keith Thompson. He'll tell you the biggest similarity is the influence a big body of water plays on the weather. He should know because Keith is a native of Jacksonville, Florida and grew up with an eye on the skies.

Keith saw a lot of severe weather move across the northern part of Florida and that experience is important when he forecasts your WEATHER FIRST on NEWSCHANNEL 3 at 5, 5:30, 6 and 11. He earned a Bachelor of Arts degree from Harding University in Arkansas. Keith has also completed his post-graduate studies in Meteorology at Mississippi State University.

Keith began his broadcast career in his home state. His first job gave him a lot of "hands on" experience as a news reporter, anchor and weather anchor at WCJB-TV in Gainesville, Florida. In 1989 he joined the NEWS 3 team and became the chief meteorologist in 1996.

Keith would tell you that one of the benefits of his job is that he often speaks to school groups and answers all the questions students have for the "weather guy." When hes not busy with those visits hes active as co-chair of the Southwest Michigan Campaign of the United Negro College fund. Hes also a member of the American Meteorological Society and the National Weather Association.

Keith is known at NEWSCHANNEL 3 for his sense of humor. Hes always ready with a joke or an encouraging word and insists he doesnt take himself too seriously. Thats a good outlook for someone who has to try to forecast Michigan weather. Keith's a sports fan and especially enjoys ice hockey and auto racing. In his quiet times he enjoys reading.

Keith lives in the Kalamazoo area.